The HV plastcompactor is a compactor for the densification of regrind of low bulk density, in particular shavings, foam, fibres and film – available in three sizes.

The agglomerate thus has a higher bulk density than the source material. It has good flow characteristics and can be extruded or injection-moulded without forced feeding. In mixing silos, e.g. after film washing lines, densified material gives higher amounts of material in a mixing batch, thus producing a more even mixture.

The agglomerator/compactor consists of two discs equipped with kneading bars, one of which has a rotating mounting. A drive performance of between 22 and 160 kilowatts at the rotating disc generates the friction needed for the densification process.

In contrast to standard batch-type agglomerators or compactors, the HV agglomerator carries out a continuous process without adding water to the product. The material is pre-shredded in a granulator and automatically fed into the compactor via a buffer silo.

The agglomerate is reground in a second granulator; an air classifier sorts out dust and fine particles and returns them to run through the process again. 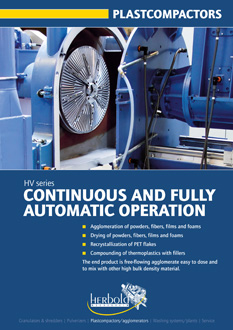